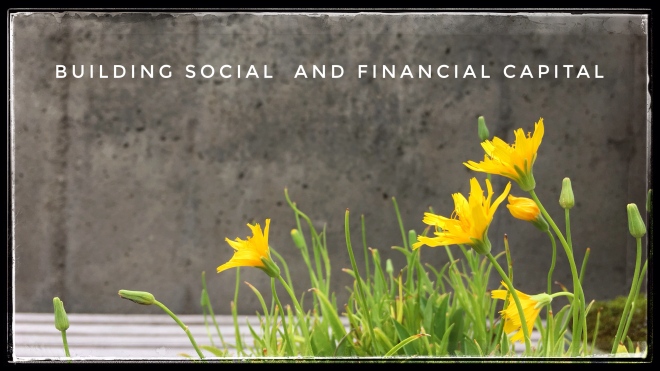 There has never been a better time in history to build social capital. In fact, our culture is obsessed with social interaction via the internet, blogging, and the ever-changing landscape of social media. One wonders if the social capital being created nowadays is as strong as the more traditional face-to-face ways of building one’s network of connections? In The Founder’s Dilemma, Noam Wasserman states that when it comes to social capital “youth is often at a disadvantage” (47). He believes that young entrepreneurs lack the lifetime of experience that helps to accumulate the “durable network of social and professional relationships through which founders can identify and access resources” (47). I am inclined to believe social capital is more readily accessible to youth and experienced professionals alike because of the internet resources available. However, I am not convinced that the type of capital created through social media is as influential as the connections made through a robust career as a professional, the lifetime of bonding and bridging that occurs when meeting, greeting, and building personal and professional relationships.

Financial capital is another type of capital where Wasserman believes youth is at a disadvantage. He points out that many entrepreneurs will build a nest-egg while employed in order to fund their startup. He states that “the size of this cushion can largely determine the amount of time the founder is able to give to the startup, the amount of stress and urgency he or she feels to become cash-flow positive, and the decisions he or she makes to build the startup” (48). I imagine I would not be far from the truth if I stated that while social capital is easier than ever to obtain, financial capital has become significantly harder to access since the financial crisis in 2008.

“Even though social capital exists outside of the conventional financial paradigm and is difficult to measure in financial terms, it has very real economic value because it can be converted into financial capital if needed.”
-Jesse Colombo It’s Never Been Easier to Build This Kind of Little-Known Type of Wealth

So, if an entrepreneur is low on both financial and social capital, where should they begin to accumulate wealth? Since social capital can be leveraged to create financial capital, then building connections is a smart place to start. Of course employing internet resources is an immediate way to create connections, but if one is looking for capital that is a little less tenuous than social media contacts, an effective way to build social capital is through the arts.

“Cultural endeavors offer social capital effects both direct and indirect, immediate and long lasting. The arts provide a powerful way to transcend the cultural and demographic boundaries that divide us and to find deeper spiritual connections with those like us. To use our phrasing, the arts create both ‘bridging’ and ‘bonding’ social capital.
-Better Together: The Arts and Social Capital

Involving oneself in the arts is a fantastic way to meet a budding IT tech, a investment lawyer, and a retired business person all in one setting. As the Better Together article states, the arts are both bridging and bonding. Choral societies bring together people who love to sing. Jazz jams bring together lovers of improvisation. Art galleries bring people together through a love of color and cultural history. Theaters bring actors and audience together through literature. Art has no age limit, no status boundaries, and no minimum requirements for intelligence or abilities. Connections made through the arts are more likely to be stronger and more long lasting because the connection has a personal touch through the love of the art form (bonding), and creates relationships between people who might otherwise never have met (bridging). These well founded connections can then be utilized to access funding, while also adding to each person’s community wealth.

Returning to Wasserman, “research has shown that people who accumulate more social capital before founding are able to attract more human capital (such as cofounders) and financial capital (such as seed capital) with which to launch the startup, and to do so more quickly” (48). In conclusion, building social capital can be exceptionally rewarding in terms of building financial capital to start a business. Utilizing all the resources available for increasing social capital, including the internet and community involvement, can significantly benefit the success of a startup and the people involved in the founding. Investing in social capital through the interaction in the arts is particularly potent way to make strong, worthwhile connections.