I have a keen interest in the maker movement. In fact, being a maker is what inspired me to pursue a masters in entrepreneurship. Like many makers, I did not intend to start a business. I began making felt flowers as a creative outlet after the birth of my first child. In the beginning, my focus was on creating the flowers, not selling them. Making flowers was simply something to do, a hobby. It was only after my husband questioned why his office was covered in felt flowers that I pondered trying to sell them. I applied to the farmers market and Heartfelt Flowers was born. 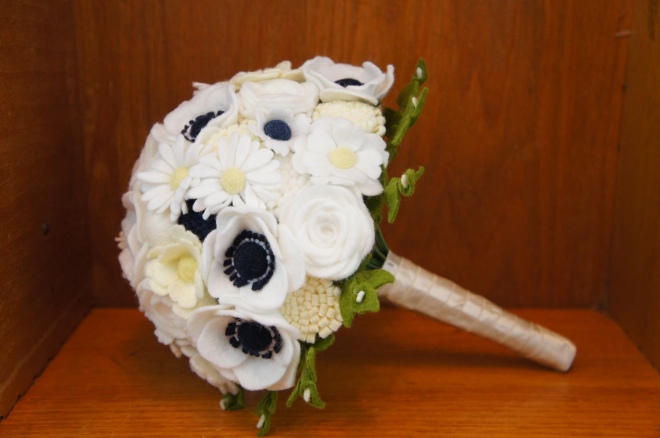 I did not consider the dilemma of wealth versus control that Noam Wasserman brings up in his book The Founder’s Dilemma. I made my business decisions week to week after my children went to sleep. In the midst of my third summer at the farmers market, I began exploring the issue of scaling up in hopes of creating more money. Little did I know, I had come face to face with the dilemma of wealth versus control. I could not make  more money unless I could make more flowers, and I simply did not have time to make more products. I wondered: Could I make them faster? Could I teach others how to make them exactly as I do? How do I keep my designs from getting copied? If someone else is making my flowers or using my designs, does my product loose its story value?

The questions that came up for me as I considered the wealth aspect of my business is not all that uncommon in the realm of the artisanal economy. Anthropologist Grant McCracken studies American culture and the connection between culture and commerce. McCracken has a series of articles on his website that address the concept of the artisanal economy. In his article The Artisanal Economy and the 10 Things that Define It, he describes the cultural components of the artisanal movement. According to McCracken, consumers of the artisanal movement have a preference for small batch, handmade, all-natural products. These products are unbranded, yet personalized by the maker. Consumers feel as if they are purchasing the story of a location, a product’s simplicity, and/or the maker’s authenticity. Artisanal products are not clouded by the large corporation and its manufacturing, but seen as simplified and transparent in their production and marketing. And finally, there is an ego driven sense of connoisseurship. Artisanal products are often perceived as more sophisticated by consumers.

Think about the kind of vendors you meet at your local farmers market and your motivations for shopping with them, and you will have a pretty good understanding of the artisanal economy.

As you can see, the maker movement fits squarely inside the artisanal movement. Consumers feel the worth of the handmade object is connected to the story or meaning behind the object. This brings me back to the founder’s dilemma. I believe the makers dilemma poses a double dilemma.

An entrepreneur is charged with deciding between the worth of the business and the importance of control over the business. But a maker-entrepreneur must also consider how worth is connected to the story of the object.

Seeking more wealth may forfeit the meaning of the object, because it may lose some of the artisanal qualities consumers value.

Choosing control may forfeit the value of the object because the maker is limited by the manufacturing of the product.

Touching on Wasserman’s parallel concept of being king or being rich, I’d like to talk about the maker-entrepreneur motivations. According to a study entitled The Maker Economy in Action: Entrepreneurship and Supportive Ecosystems in Chicago, New York and Portland, “the firms that maker-entrepreneurs build from products they create often emerge from deeply held values, whether defined in terms of attachment to place, a response to changing norms of work, a sense of social and ecological responsibility, or new ways of relating with the material world.” If this is true, then it is possible to believe that maker-entrepreneurs view themselves as both rich and king because of the inherent value behind their motivation for creating. By the way, this study was the first of its kind to analyze the maker economy. Since then, interest and participation in the movement has grown exponentially. This study focuses on  “bags”,(Etsy, craft fairs, and pop-up shops), “bites” (food trucks, craft beer, and farmers markets), and “bots” (apps, tech, and internet tools).

Finally, returning to Heartfelt Flowers as an artisanal business, and the choice between wealth or control, I have chosen control for the time being.However, in future endeavors, I believe beginning with this choice is a significant step to creating a business worthwhile.

5 thoughts on “Maker-Entrepreneurs: Wealth vs Control in the Artisanal Economy”